Bayon Temple is an impressive and distinctive temple located right in the centre of Angkor Thom, the last capital of the Angkor civilisation. Bayon Temple is open to visitors every day from 05:30 until 17:00, and to visit you need to buy a ticket for the Angkor Archaeological Park, which costs $37 for 1 day, $62 for 3 days, and $72 for a 7 day pass.

There are a number of things which make Bayon Temple stand out as different from other major temples in the Angkor Archaeological Park. Firstly, Bayon Temple was built later than other temples in the park. Bayon temple was built at the end of the 12th Century, or possibly the start of the 13th Century, approximately 100 years later than Angkor Wat. Indeed, Bayon Temple was the last state sponsored temple built by the Angkor regime. Secondly, the temple was originally dedicated to the Lord Buddha rather than being a Hindu temple like other surrounding temples, although later on it was repurposed to become a Hindu temple. Thirdly, Bayon Temple has a very distinctive architectural feature in the 37 towers with faces carved into them. Some of the towers have faces on all four sides, some only on one side. Around 200 of these carved images have survived and some are up to 2.5 metres tall. There is a lot of speculation about whose image is portrayed on these towers, with the two most likely candidates being the King who commissioned the temple, Jayavarman VII, or the Mahayana Buddhist god of compassion, Avalokiteśvara.

Unlike many of the other temples in the Angkor Archaeological Park, Bayon Temple is not surrounded by a moat and wall, most likely because it is situated within the defensive wall of Angkor Thom. The temple has three enclosures. The first measures 160 by 140 metres with four gopura entrances, one on each side. The walls of this outer enclosure are decorated with fantastic reliefs depicting battle scenes, local life and life within the royal court. A lot of what is known about life in Angkor at the time is derived from these reliefs. The second enclosure is 80 by 70 metres and features more of these fascinating reliefs. The third and final enclosure is where the towers with the faces are located. 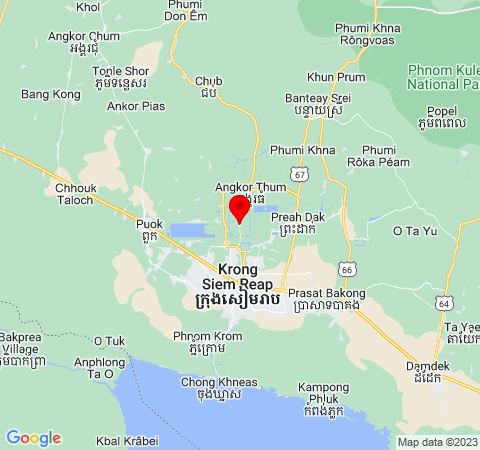