Bokor Hill Station is a hill station resort constructed by the French colonialists in the Province of Kampot and later abandoned to re-emerge nine decades later as one of Cambodia’s more bizarre tourist attractions.

Bokor Hill Station is perched on the top of Bokor Mountain at an altitude of 1,048 metres above sea level. The French colonialists built a church, post office, and hotel/casino on this elevated point in the 1920s as a leisure retreat from the heat of low land Cambodia, in a similar way that the French developed Dalat in Vietnam for the same purposes just on a larger scale. The Hill Station was abandoned by the French in the 1940s because of an increase in activity by armed members of Cambodia’s independence movement. In the 1960s Bokor Hill Station experienced a brief renaissance during a period of relative calm for the newly independent Cambodia with a new local elite making use of the hotel/casino that the French built. This period ended in abruptly in 1972 when the Khmer Rouge took control of the country and decided that the country’s wealthy city elite should be relocated to the countryside to be re-educated and put to work on notably unproductive farms. When the Vietnamese invaded Cambodia in 1979, Bokor Hill Station then became one of the last strong holds of the Khmer Rouge who resisted the Vietnamese for around a decade. The church in particular has bullet holes in it, a reminder of the fighting that went on here in the 1980s.

The best part of a trip to Bokor Hill Station is the journey itself which twists and turns up the mountain side up on a sealed concrete road constructed in 2011 as part of a project to redevelop the site. There is a Buddhist temple located on the way up and a nearby waterfall to visit as the same time as going to the hill station. It is worth visiting the hill station on a clear day as there are good views across Gulf of Thailand. The hotel/casino has now been redeveloped and reopened which takes away a bit from the atmosphere and interest of visiting the hill station. The church, however, remains in a derelict state and you can inside and look around. A trip to Bokor Hill Station is best enjoyed by visitors with their own transport, normally a motorbike rented from Kampot Town, as part of a wider tour of the Bokor National Park. The hill station, whilst a curiosity and an interesting historical site, is not in its own right really worth the long trip to get there. 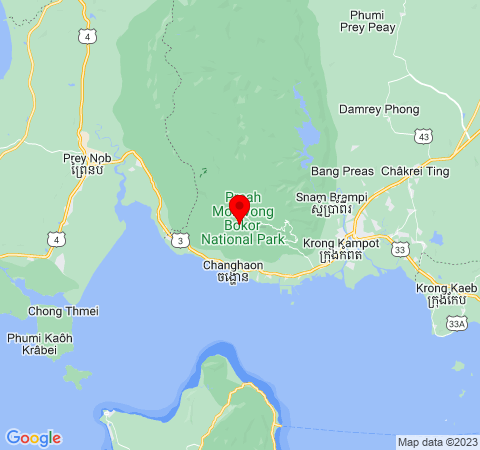