Kampong Phluk is a collection of three villages located near to each other on the Tanas River which flows into Tonle Sap lake. The water levels in the river change throughout the year being at their highest from May to October and receding from November to April. In February and March the water levels are low to the point that the villages are no longer ‘floating’ which is not the most interesting time to visit.

Kampong Phluk Floating Village is a popular tourist attraction largely because its proximity to Siem Reap. A visit is an alternative to visiting the temples, which are the principle reason most visitors come to Siem Reap. By car it takes about 45 minutes from Siem Reap to reach the point where you need to board a boat to reach the villages themselves. A tour will cost from $35 to $50 USD per person, although you can do the trip more cheaply by taking your own tuk-tuk to the car park from where boats depart. Per person a boat trip costs $20 and lasts about 1 hour passing through the 3 villages and out onto the sea like Tonle Sap lake. For an additional charge of $5 visitors can also take a second shorter boat through part of the vast mangrove forest which surrounds the villages.

Together the three floating villages have over 3,000 permanent residents living in houses on stilts. The villages also feature a school, a temple, a church and a number of restaurants primarily catering to tourists, as well as local shops all built on top of long stilts. During the time of year when the area is flooded by high water everyone and everything travels around in boats. Livestock such as chicken and pigs also live on boats and the river has lots of cages inside which which live crocodiles which are farmed for food. The primary industry for residents of these villages is fishing, with some crops grown during the dry times of year. These village receive lots of visitors, but this is not primarily a tourist attraction. People have lived this way of life long before tourists arrived although the creation of formal villages with facilities only happened after the end of the brutal Khmer Rouge regime with the assistance of charitable groups which funded the creation of the school and other amenities. 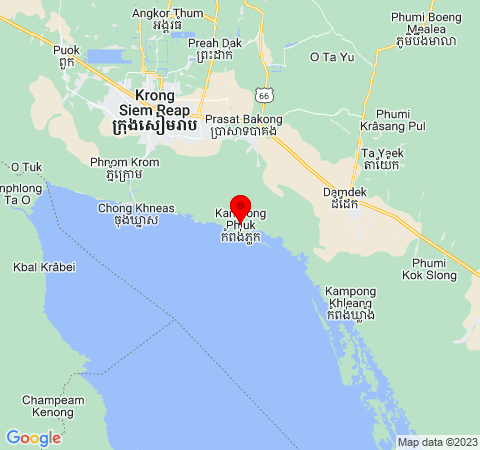