Prasat Phnom Chisor is one of the most important temples in Cambodia which is not located within the Angkor Archaeological Park, but rather on a hill not far from the town of Takeo.

Phnom Chisor was built in the early 11th Century by King Suryavarman I. Suryavarman I was one of the more unusual rulers of the Khmer Empire. He ruled from 1006 to 1050 having taken the throne by force. Suryavarman I is believed to have come from the northern part of the Khmer Empire in what is now Thailand. Unlike other Khmer rulers, he built little of note in the Angkor capital but instead built major temples elsewhere within Cambodia such as Wat Ek Phnom near Battambang and Prasat Preah Vihear in the north of the country right on the border with Thailand. The choice of location of Prasat Chisor is on 133 metre tall hill in an otherwise largely flat landscape adds to the appeal of a visit to this temple. From the top hill there are fantastic views across what appear to be endless rice paddy fields.

Prasat Phnom Chisor is the name commonly given to the main temple structure on the very top of the hill. There are two staircases leading up to the temple on top of the hill, one with 390 stairs and the other with 408 stairs. On a hot day it is quite an effort to reach the top of the hill. The Western staircase is the more interesting of the two as leads past Sen Nimol Temple and Sen Roveang Temple which form the outer gates to the main temple. Beyond these two gates are the outlines of what was a moat and an earthen embankment marking the perimeter of what was once a substantial settlement. The main temple itself is constructed from laterite blocks featuring intricate carvings depicting both Buddhist imagery and Hindu deities. It is worth spending some temple inside the temple exploring the structure to appreciate the carvings. 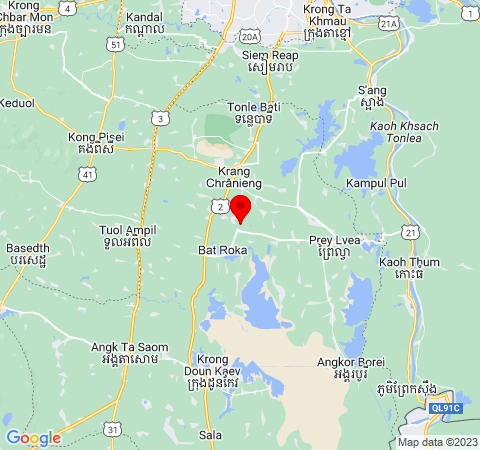