Ta Prohm Temple was founded in 1186 by Jayavarman VII, one of the most prolific temple builders of the Khmer Royal Family and only the second Khmer King to embrace Buddhism. Most of the temples in the Angkor Archaeological Park built before and after his reign were originally established as Hindu temples. Ta Phrom is the modern name for this temple, which was originally known as Rajavihara, which means ‘Royal Monastery’. The temple covers a large area with a surrounding wall measuring 1 km by 650 metres. According to inscriptions found at the temple 12,500 people lived at Ta Phrom, with a further 80,000 people in the surrounding area involved in the construction and running of the temple. The inscriptions also say that the temple became very rich and flourished until the fall of the Khmer Empire in the 15th Century.

During the 5 centuries Ta Prohm Temple was abandoned the jungle grew into the temple itself, with the roots of fig and Tetrameles trees enveloping key parts of the structure. The French archaeological teams that first worked on restoring the temples of the Angkor Archaeological Park decided to leave most of the trees and other vegetation in place at Ta Prohm Temple giving the site the appearance of a temple literally lost in the jungle, which is was when it was ‘rediscovered’ in the early 20th Century. The structure has been largely secured and made accessible by wooden walkways, also designed to discourage visitors from damaging the temple by climbing over it. The temple itself consists of 5 enclosures, the outer enclosure of which has four large gopura entrances at the cardinal points. The structure has fewer reliefs than many of the other surrounding temples, however, one carving that has been the source of curiosity and much speculation appears to resemble a stegosaurus. How ancient Khmer people knew about stegosaurus is a mystery. 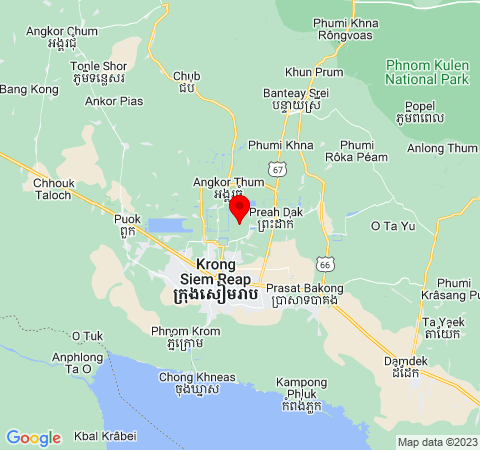