The Terrace of the Leper King is a section of wall featuring elaborate carvings located in the northwest corner of the Royal Square of Angkor Thom in the Angkor Archaeological Park near Siem Reap. To visit the Terrace of the Leper King you need to buy a ticket for the Angkor Archaeological Park, which will cost you $37 USD for a single day, $62 USD for three days, and $72 USD for a week.

About the Terrace of the Leper King

The Terrace of the Leper King forms part of a 360 metre long sandstone wall at the boundary of one side of the royal compound of the one time capital of the Angkor Empire, Angkor Thom. The Terrace of the Leper King was constructed during the reign of prolific temple builder King Jayavarman VII at some point during the last half the 12th Century. The terrace is unique in that it features two walls with a walkway in between. Each wall features seven layers of images carved into the soft sandstone. The images are largely of members of the Royal Court, mythical creatures such as Garuda and Naga, and other supernatural beings. Shiva also features on the outer walls in acknowledgement of the earlier Hindu traditions of the Khmer Empire, which adopted Buddhism as the state religion under King Jayavarman VII.

The name ‘Terrace of the Leper King’ is a reference to a 15th Century sculpture which was discovered by this particular section of the terrace. The statue, which portrays a naked man, is believed by some to be a representation of Prince Preah Thong, an Indian man suffering from leprosy who came to Cambodia to marry the daughter of a Khmer King and subsequently ascended to the throne and founded the Angkor Empire. A competing theory is that the statue represents Yama, the Hindu god of death, and that the terrace was a place where members of the royal family were cremated. Either way, given that the terrace built before the statue was carved the name ‘Terrace of the Leper King’ probably bears little relation to the design and original purpose of the wall.

Location of the Terrace of the Leper King

The Terrace of the Leper King is located 10.1 km by road from Siem Reap Town. 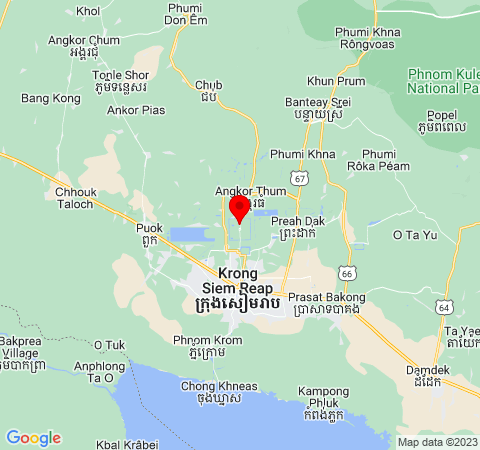