You can travel from Poipet to Battambang either by train or by bus. At the moment train services operate infrequently so it is fairly likely you will need to take a bus instead, which completes the journey about an hour quicker than travelling by train.

Train Times from Poipet to Battambang

Bus Times from Poipet to Battambang

There are currently 5 bus services a day from Poipet to Battambang available to book online.

Buy Tickets from Poipet to Battambang

Enter your travel date into the Search Box to buy tickets from Poipet to Battambang. 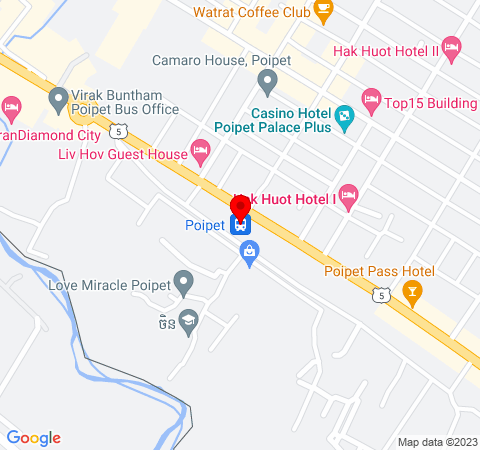 Battambang is one of the more pleasant towns in Cambodia which is fast becoming a popular tourist destination. In terms of being a place to visit, Battambang has got a lot going for it. Battambang has good amenities. There are some good and generally very reasonably priced hotels and guesthouses, plenty of restaurants catering for foreign visitors and some Western style bars. Most visitors will find Battambang a comfortable place to stay. The town itself is compact. You can easily walk around the town centre which has clear pavements, unlike Phnom Penh, and a riverside promenade.

In terms of things to see, Battambang town centre has a rich heritage of Khmer, Thai and French architecture. The area where the modern day town is located was settled in the 11th Century, and there are a few remnants of that early Khmer community scattered around the town such as the Sangke Pagoda at Wat Sanker. A few centuries later Battambang, along with the surrounding region, came under the control of the Kingdom of Siam. The Thai rulers also left their mark on the city, in particular the Governor’s Residence, built in 1905, is a fine example of Thailand’s then obsession with building Neo-Renaissance style buildings. After Thai rule ended, Battambang became part of France’s Indo-China Empire. French style buildings, most notably Battambang Central Market, were constructed throughout the centre of Battambang. Many of these French era buildings have been converted in hotels, cafe and restaurants which has been a very successful way of maintaining the city’s architectural heritage.

Next read about Travel from Battambang to Phnom Penh