By train the journey from Sihanoukville to Kampot is scheduled to take 1 hour 40 minutes.

Train Times from Sihanoukville to Kampot

Buy Tickets from Sihanoukville to Kampot

Use the Search Box below to buy tickets for travel from Sihanoukville to Kampot. 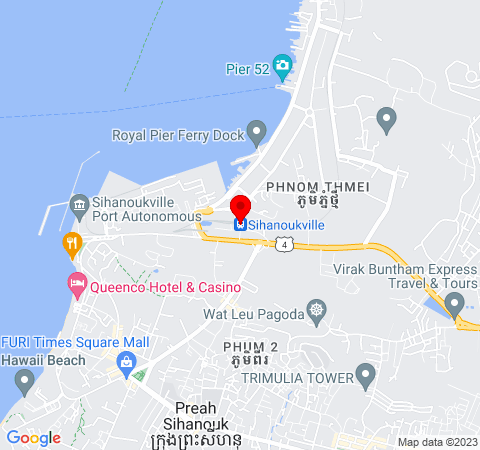 About Travel to Kampot

Kampot is a small city, with around 45,000 permanent residents, on the Preaek Tuek Chhu River about 5 km from the sea. Kampot itself doesn’t have a beach, however, swimming and kayaking in the river are popular and relatively safe activities. A few kilometres upriver from Kampot city centre there is a popular kayaking route which runs 3 km along inland waterways through fields. The route has been termed the Green Cathedral because the trees on both sides of the waterways overhang to form a shape similar to the vaulted ceilings of a church. Other activities in the area include a trip to nearby Kep Beach and the idyllic Rabbit Island, a visit to a pepper farm (Kampot is famous for its pepper), a tour around the salt fields and a visit to Phnom Chhnork, which features cave shrines created in the first millenium and therefore pre-date the Angkor era.

Kampot Town has lots of amenities for foreign vistors. It has become a popular destination for short and longer term foriegn tourists and the number of businesses serving foreign food and accommodation for foreign visitors has increased. Unfortunately, Kampot is not quite the sleepy town seldom visited by outsiders that it used to be, and the level of crime and sharp business practices directed towards foreign visitors has increased exponentially. Nonetheless, the city has lots of charm. The crumbling colonial area buildings and dilapidated Chinese style shophouses provide a glimpse of the city’s interesting past. Kampot also has a traditional daytime market, a tourist market and a night market. Markets in South East Asia are generally the liveliest places in any town and these markets are no exception.